Though we have been enjoying animation for over several decades, the idea of vivid animations talking and moving still makes us go wide-eyed. The advent of 3D animation has added another layer to the mystery and all the more intriguing to even fathom about. However, many, even in the business sector do not realize that the 3d animation production process is tedious and time-consuming. Further, they also refuse to understand the applications of 3D animation in a wide range of spectrums in business and other domains such as in architectural visualization, product visualization, etc.

However, this post will help you to understand the 3D animation pre-production process which we follow at PGBS and how it makes its presence felt in the larger business spectrum. 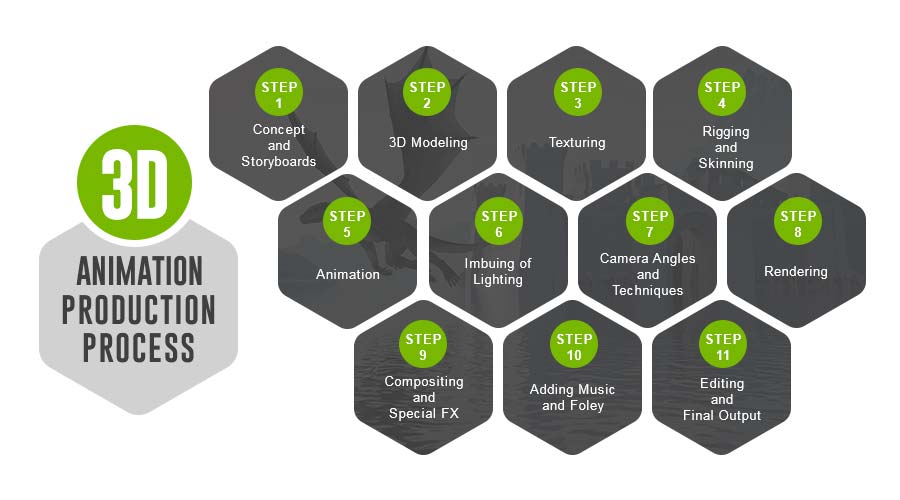 If you think from the perspective of a 3D modeling services provider, there are numerous stages in an animation company process. There is no doubt that the 3D animation process is a rather complex one and it involves relentless efforts of everyone involved to create the best and impeccable animation. As such, in order to help those who aren’t familiar with the whole technical side of the same, all the stages of animation production have been broken down to simple and comprehensive steps here below.

Step #1: The Concept and Storyboards

The first of many 3D animation process steps starts with the concept for the animation. Whatever be the project, there must be a concept, and a narrative thereof, that binds together all the scenes and frames. It is based on the concept that the storyboards are created. The storyboards help translate these concepts into visual form where everyone can understand it and they are created with the intention of displaying the narration in two dimensions; time and interaction.

The first dimension, time, illustrates the sequence of the scenes; what happens first, the next and so on. The next dimension, interaction, talks how various elements such as the voiceover, soundtrack, the effects, transitions and many others interact with other. Any of the elements can interact with any other. The impact such interactions will bring for the audience is determined by the storyboards.

As this is an important stage of animation that determines how your work must go and the direction it should take there are numerous companies that offer exceptional and timely storyboard illustration services just the way you would love.

Many think that 3D modeling refers to simple drawing. But how farther can they be from the reality. Once the storyboards are done and approved by the client, the next step is modeling. This is where the designs such as for 3D character designs and 3D game props designs are carried out as per the needs. The most common technique is to use a simple object—often called ‘the primitive—and develop or expand it to any form, onto which clear details can be given and refined as much as required. Primitives can be of any form as wished by the 3D modeler.

It can be a 3D object such as faces or polygons; it can be anything like a 2D line such as an edge, or it can even be a single line such as a vertex. All of these primitives can be easily reshaped or manipulated as wished by the person modeling it with the help of powerful and robust 3D animation software‌ programs as needed. As this is the foundation upon which the rest of the work is carried out, companies like us that offer professional 3D modeling services ensure that the best, most effective and effortless technique is utilized and they can be different from one project to another.

Texturing is the process, in the layman’s terms, where the 3D models created are given textures. In other terms, 2D images are overlaid on the 3D models to elicit the feeling of colors, designs, and even textures. This process is referred to as mapping and it must be understood that the coloring of each and every element in an animation comes with this process.

Textures can be created in any 3D texturing software program that lets you edit images such as Photoshop and the illustrations made of the textures can be applied to the models as you would otherwise normally paint with colors.

There are certain animators who take advantage of the real images taken altered to suit the requirements and that can effectively provide diverse patterns and be repeated as much as needed. This is the process that is used to create hair; instead of creating the samples of a single strand, groups of hair strands are created upon which the texture of individual strands is overlaid and detailed.

Step #4: The Process of Rigging and Skinning

At the end of the third stage of animation, you will end up getting what essentially can be called a skeleton. Now that you have the skeleton, the next task is to make it move as you wish by putting the same right onto a 3D character. This is the last step just before the character animation is started.  This process is called ‘rigging and skinning’ and is the most fundamental stage that lays the foundation to create the system that will govern all the movements and mobility patterns of a character throughout the animation process.

Rigging is, in fact, the process of establishing a skeleton that can be controlled to regulate the movement of the character as desired and required by the animator.

Depending upon the subject that is used, each of the rigs used will be different along with the controls administered for the same. The next process is to attach the sig skeleton into the 3D model being perfected in order to enable the manipulation of the same with the help of the controls established on the rig.

Step #5: The Actual Process of Animation

Now you understand that the steps animation process do not start with the actual animation. It is at this stage we begin to actually carry out the process of animation which is the process where the 3D models are made to move. There are several companies providing 3D design services that utilize the keyframe animation method that is utilized to manage the objects on the frame-by-frame basis.

There are other methods such as utilizing a spline or motion capture to export the movement data from an external data source. Another way is to utilize the inbuilt movement mechanisms in your software program to give the desired movement pattern to the objects.

In order to get the feel and look you expect, there is a range of settings that need to be applied on the materials on each frame one by one.

If you did not know better, what distinguishes a bad cinematography from a good one is the use of camera angles and techniques utilized as needed intelligently. The very fact that physical limitations do not apply in the animated world as they do in the real world makes anything is possible with the camera tool. This provides the animator with impeccable possibilities and opportunities to play with the tool to create the most arresting, effective and incredible camera angles that may be impossible to use is a live-action movie.

However, it is important that the basic concepts and certain guidelines are followed in the step to ensure that you do not end overusing the same to a position where the animated product is rendered useless.

Step #8: The Process of Rendering

This is the process where the graphics that must be used on the models to created and exported to be allied on the models. If you consider, rendering is the last of all process steps and hence is the most crucial step of all. It is a real concerning scenario that most beginners overlook the same and give their concentration in creating and animating the models.

However, it must be understood that the process of 3d rendering is as much important as any other animation company process that is used in the entire stages of animation production. Unless there are effective and convincing graphical elements, the final product may not look as exceptionally as intended at the end of the day.

Step #9: The Process of Compositing and Special FX

It is with the help of several compositing programs that the renders are made available to touch-up, edit, and overlay effects as required in an animation. It includes everything that you typically know of as effects such as morphing, evaporating and explosions along with many others. It can be achieved by infusing live-action scene shots with the settings and environments created digitally.

There is no doubt that the background music and foley used in any video will certainly enhance the quality of the viewing experience for all the audiences. Apart from that, it helps create the feeling of a natural environment which the audience can relate to by understanding the sounds that come with it. There are certain animations where music is an integral part of the narration and the story. Such music is created by a musician as per the needs of the narratives that run through the animation.

However, a foley artist creates sounds that need to be added to the scenes such as the sounds in a market, in a busy street, and in a forest, and the likes. In order to create such sounds, a range of props is created.

Step #11: The Process of Editing and Final Output

All that you have done so far as part of the 3D animation services are going to end here. At this stage, all the elements that you have done such as the music and foley and the composited renders are edited together to create a cohesive animation that is as expected at the beginning of the process. Editing checks will be done multiple times to ensure that everything is in sync with everything else expected.

Once satisfied, the edited product is transported to a suitable format or suitable formats as per the broadcasting standard specifications of the client.

It is really important that you get the support of an established and professional 3D rendering services provider to get your work done. However, it is easier said than done. You may find it easy to do that but with the efforts and time go into doing that you want to get the best provider offering a range of mechanical animation services as you need.

If you are trying to get the support of the best 3D animation studio in India who can provide you with impeccable and affordable animation services, check with us.